skip to main | skip to sidebar
“Burn down your cities and leave our farms, and your cities will spring up again as if by magic; but destroy our farms and the grass will grow in the streets of every city in the country.” William Jennings Bryan 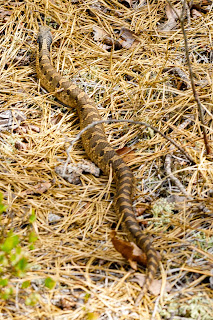 I had an “unexpected memory” the other day. I was walking a trail in the Pinelands with a hiking group when I happened upon a smaller type of snake that didn’t seem too concerned about our presence - it neither scurried away nor got defensive, but just slowly kept going along its way, undeterred. I was able to take a photograph – not the best, as I only had a macro lens and I don’t go chasing down snakes for their “best side”! I am not a “snake person”. They do fascinate me, but I only like to enjoy them at a distance.

I looked up the snake when I got home to see what kind it was, and found out that it was an eastern hognose snake, which brought back a chain of memories from when I was six or seven years old, a time when we lived up on the Janesville Pike in Tyrone, surrounded by farm fields and forests.

My mom was a city girl, brought up in New Haven, who’s weekend playground was nearby New York City.  She wasn’t much for corn stalks and wildlife as she was for skyscrapers and busy sidewalks.

So, when my older brother came in the house exclaiming there was a snake out in the back yard, we were all ushered inside the house and not allowed to venture out. Danger, danger, danger! was orbiting throughout her mind! She must have immediately called the game warden, a friendly man named Joe Grimm, because he was soon knocking on the front door.

Next, I remember Mr. Grimm leading us kids out the back door, holding a forked stick in his hand. As we stood back, he walked over to the snake and began prodding it with the stick, pushing it to the side with the fork. The snake moved away slowly, but Mr. Grimm, with a quiet grin and a concentrated look on his face, was persistent in his efforts to annoy the snake.

The snake, continually prodded by Mr. Grimm’s deft use of the forked stick, finally gave up trying to move on. It wriggled a bit and rolled over on its back, offering its white belly to the warm afternoon sun.

We kids stood there stunned, to think that Mr. Grimm killed the snake, and so easily.

He turned to us and said “See, he’s just playing dead. This isn’t a rattler or a copperhead- it’s a plain ‘ol hognose snake. Harmless!” With that, he walked back to the house to let my mom know that we were all safe and that it wasn’t much to worry about. I remember that he was laughing a bit as he calmed my mother’s fears. After he left though, it did not much matter, as it was another three days before she let any of us kids outside of the house to play!

This memory began a cascade of others. There are so many. I can still remember the skinny dogwood tree that I would shimmy up to look down on the world – I can still feel the roughness of its dry bark and its leafy smell. I remember the time our dog came home shot in the chest, and lived through it. There was the day my sister and a friend went out to the cornfield and gathered corn silk to make “mop head” wigs so that they could look Paul and Ringo. In the back yard, there were peach and apple trees, more moss than grass, and a swing. The back yard was also where, along with my brothers, I learned how to play baseball and football. At times we would see herds of deer and more than once, a black bear. Across the dirt road that ran along the side of the property, was a pasture that held a few cows that were owned by the farmer who lived at the end of that very road. Along our driveway we had wild tiger lilies that attracted all kinds of butterflies that I would sometimes catch. I could keep going and list more memories that have come back to me from that time – there are so many! Maybe someday I will write the stories of some of them.

Its interesting how a chance encounter with a snake – a kind I hadn’t seen in the last fifty-six years ago since Mr. Grimm was summoned to our house – could stir up so many memories. Maybe seeing the hognose wasn’t chance. Maybe it was the universe wanting to give me back a few pages of my story, ones that had been misplaced over time. I have to admit, I feel good to have them back again. 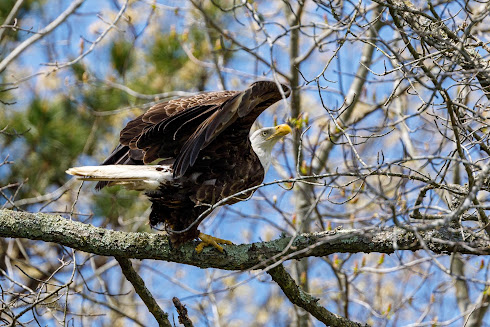 I took this shot last Sunday. The eagle was sitting in an oak tree at the side of a field, waiting I think, for prey. In NJ, bald eagles are making a comeback. Due to DDT and habitat loss, there was only one known active nest in the state as of the early ‘80s. Since then, with the disastrous environmental effects of DDT fading, biologists worked to reintroduce bald eagles and protect their nesting habitats. There are now 220 known active nests in the state, and at least one in each county, with most being in the southern counties.

I remember the times when there were no bald eagles to be seen. Now, I see at least one, two, or more on most days spring through fall, perched somewhere or floating high above on thermals. I don’t always get a chance to take a photo - that is still a very exciting and special occasion for me. (Admittedly, I sometimes still succumb to 'camera shake' because of the excitement.)

With all the saddening news about climate change and the destruction of natural areas, especially with the recent openings of so many of our national lands for profit, its uplifting to see a bald eagle, and to know that their story is a good one that continues to get better.

Lately I have been listening to “oldies”.  The songs I have been finding reach back over my life, from just a few years ago all the way back to my early childhood. One of the first songs that I can remember is “Walk Right In”, sung by the Rooftop Singers, and popular on the radio in 1962. Another is “Sugar Shack”, sung by Jimmy Gilmore and the Fireballs which was popular in 1963. Both these songs bring back some of my earliest memories.

One of those memories is playing “Tarzan” with my brothers and older sister. My memory is that, only wearing our tightey- whitey underwear, we were climbing around on our bunk beds making jungle noises. My sister was Jane, my older brother Tarzan, my younger brother “Cheeta”, and I was “Boy”.  This was while we were living in Oakridge, Oregon, and a time of my earliest memories – an oak tree in the back yard, Sammy our cocker spaniel, a woman who netted and tagged birds, train tracks behind the house, seeing elk, taking walks with my mom, and the sight of Mt. Bachelor in the hazy distance.

It’s amazing how a song can bring out these snapshots and memory movies that otherwise may have stayed tucked away somewhere in the subconscious. Research has found that music stimulates neural networks in our brains, including memory, emotion and creativity, which triggers autobiographical memories. Scientists have also found that in most cases, music tends to brings out the happier memories, whereas, photos, places or objects can bring out both good and “bad” memories. Listening to music, or a song, can help us see the brighter times in our lives.

Because oldies tend to bring back good memories, they can also cause us temporary feelings of melancholy because we know we can’t go back and have that time again. Sometimes I think to myself, wouldn’t it be great to play Tarzan again? To be with my sister and brothers in that very simple, innocent time before life spun us in different directions and into our very different lives? The good that we feel produces a feeling of longing, and different temperatures of emotions which overlap between the now and the then. It’s not such a bad thing. That bit of longing can bring us into a deeper, more meaningful state, as we revisit different parts of our lives.

It seems that with the pandemic, I have had more time to slow down. With this, I have given myself the time to let myself remember. It’s good to look back. It’s good for all of us. And so is listening to all the songs that bring out those good memories.

The Sky, the Stable, and Spaces in Between

My indie book, The Sky, the Stable, and Spaces in Between, is a collection of my poetry, haiku, and photography.

"In this collection, the author/ photographer combines the creative imagery of haiku with photography to celebrate the beauty of the sky, explore the relationships between himself, horses, and other animals, while using poetry as a means to question the value of a materially complex and hurried life."

which way to fly

Who I'm listening to

What I've been reading lately

Ken
Tuckahoe, NJ
Seventeen Farms is home for my family, along with our horses, goats, chickens, cats, and honey bees. Seventeen Farms is also a home to various wildlife - deer, wild turkeys, and more. We do our best to live in harmony with nature, and with all who come here, including our friends. I created this blog to write about my experiences here and my observations of life in general.